Introduction to the New Merle Alleles

This is an advanced genetics topic, so make sure to read the other Merle pages first!

Merle is traditionally understood to be caused by just one allele (M), however recent research has revealed a large variation in that allele, leading to the designation of a number of new alleles.

Due to the complexity of these alleles and how they interact, I recommend reading the full research by Mary Langevin at https://www.merle-sine-insertion-from-mc-mh.com. This research contains lots of photo examples of combinations of different alleles, and more can be seen in the merle Facebook group.

I have provided a basic summary of the new research below, as an introduction for anyone with more of a passing interest in the merle gene.

There are a number of ways in which mutations can occur in genes. In the case of merle, there is an extra section of DNA in the dog genome, known as a SINE insertion. This SINE insertion causes problems in the production of pigment, which is what leads to the patchy appearance of merle dogs.

A large variation in the length of this insertion has been found, and the length corresponds to different merle patterns. In short, the longer the SINE insertion, the bigger the effect on the coat.

The different lengths of merle are assigned numbers that indicate how long the SINE insertion is. These numbers go from 200 (shortest insertion, smallest effect on the coat) to 280 (longest insertion, biggest effect).

As it's a spectrum, the exact cut-off for each new allele is debatable, and each lab may draw the lines slightly differently. However, here are the alleles as defined by Mary Langevin's study:

This means that the new merle alleles are:

The "plus" just means that there's a bit of a phenotypical (visible) difference, but not enough to class it as a completely new allele.

Dogs with the cryptic merle allele show no visible merle, but will test as M if tested using a lab that doesn't detect the new alleles. This is because they have the merle insertion, but it isn't long enough to have any effect on their coat.

Although a dog with just one copy of Mc will show no changes to the coat, a dog with two copies or with one copy of Mc and one copy of another merle allele may sometimes have some very minor visible effects, usually just a slightly odd shade of black/liver.

Because cryptic merles don't have a long enough SINE insertion to cause any issues with their pigment (even when homozygous), it is safe to breed confirmed cryptic merles together or to other merles. Merle to merle breedings should only be undertaken when one or both parents have been tested as Mc. An Mc dog can be treated as if it is mm (non-merle).

A test result of Mc+ (cryptic merle plus) may indicate that the length of the merle allele is enough to have a very slight effect on the coat, which is likely to be more noticeable when paired with another merle allele. These dogs should NOT be bred to another dog with a longer merle allele, as it can result in the health issues generally seen in double merles.

The most important take away is that merle dogs with no visible merling and a confirmed Mc result between 200-230 (NOT Mc+) are the only merles that are always safe to breed to other merles.

Note that merle alleles can't lengthen, so a cryptic merle dog can only pass down cryptic merle and never any other allele (unless it is a mosaic - see below).

Dogs with the atypical merle allele have a slightly longer SINE insertion, which means a slighty greater effect on pigment production than Mc. Just one copy of the allele can result in a range of markings from no visible merle at all (as with an Mc dog), to a slight visible patterning. However, two copies will usually result in a visibly merle-patterned dog.

Some MaMa dogs can look very much like a normal Mm merle, and others may have an odd, greyish merle pattern with very little (if any) black patching. Ma may also be combined with M, Mc/Mc+, or Mh, for a wide variety of other phenotypes.

Because of the huge range of possible phenotypes, in most cases detailed genetic testing is needed to establish which merle alleles are causing a dog's pattern.

Atypical merles should NOT be bred to dogs with longer merle alleles, as this breeding can result in double merle health problems. 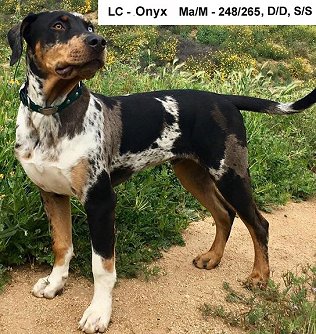 Onyx the Catahoula Leopard Dog (photo provided by Mary Langevin) shows a fairly typical MaM patterning. Note that technically, Onyx is a double merle, but he doesn't show nearly as much white as a typical MM dog, because one of his alleles is shorter than normal and isn't having as much of an effect on his pigment. Without the M allele, he would likely show no patterning. MaM can result in dogs with health issues, however - as you can see, the effect is still strong enough to have diluted some of his pigment to white.

Dogs with the harlequin merle allele (Mh), sometimes called "herding harlequin", will have at least some of their grey areas diluted to white or light grey (the extent may vary with the insertion length).

Mh is the longest merle allele, and therefore the most risky as the pigment impairment is greater than with a normal merle. If bred to any merle other than Mc, the chance for serious eye and hearing defects is very high, and these breedings should always be avoided. 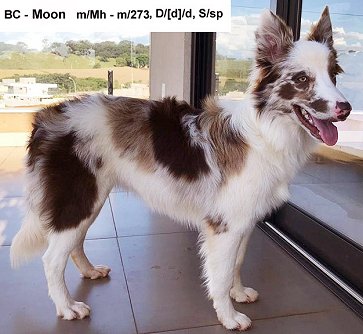 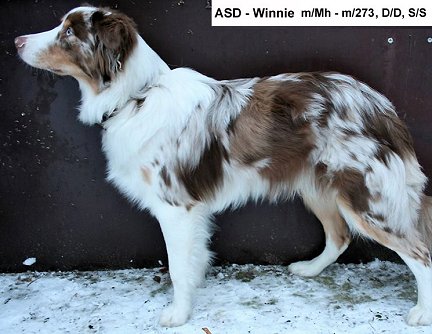 Two examples of typical Mhm harlequin merles (photos provided by Mary Langevin). Both are liver-pigmented (bb), and Moon on the left is also a D locus mosaic (see below for more informaion on mosaicism). 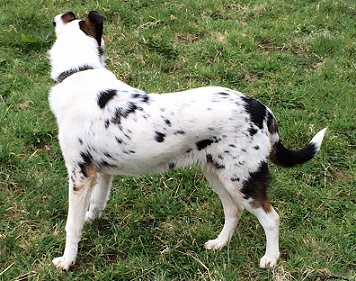 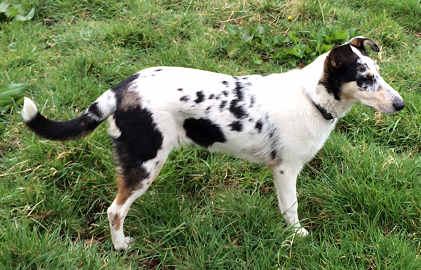 Blamorder Back with a Dream, owned by Abby Lusty

Quin, the Smooth Collie above, is untested. However, her phenotype shows she has at least one Mh allele. 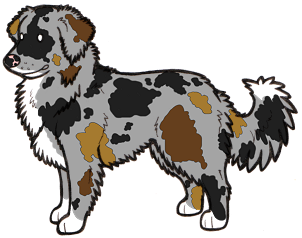 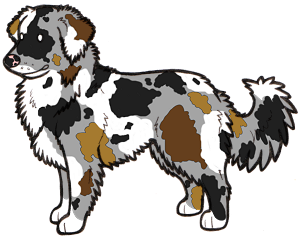 Tweed or patchwork are descriptive terms for a merle dog with a variety of brown, grey, white, and tan shades, resulting in a dog with a coat pattern that may be reminiscent of an African Wild Dog.

Tweed can occur in any of the patterns shown on the merle page (with tan markings, white, brindle etc), creating very unusual and striking visual effects. 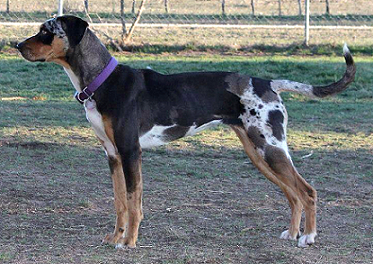 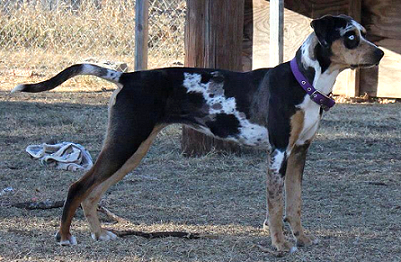 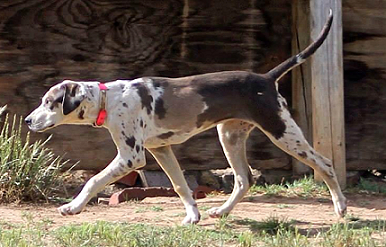 The Catahoula Leopard Dogs shown here have a clear "patchwork" pattern, and the dog in the third picture is most likely also a blue (dilute). They have not been tested, but their merle genotype is likely to be MMa. Note the clear patches of different colours, much more extensive than the normal range of dilute patches on a standard merle, and also the white areas on the first dog (which don't match any normal white pattern). These photos were kindly submitted by Melanie Zelisko of Chigger Run Catahoulas. 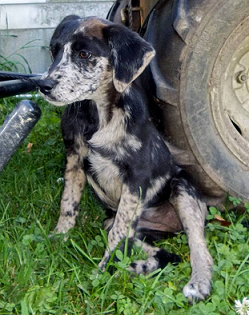 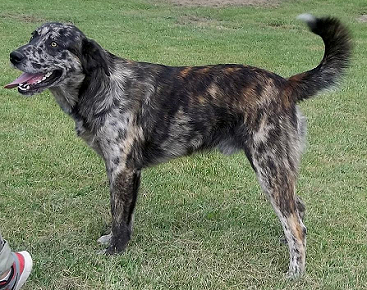 These two closely related dogs are great examples of what is generally called "brindle tweed". Again, this is a descriptive term for a phenotype, and without genetic testing we can't be sure which merle allele/s they have. The puppy has brindle points and there is also a clear brown patch on the head, which is a liver-like shade. This colour should be impossible on a black-pigmented dog, but it does sometimes occur on Ma or Mh merles. The flecks of black on the tan areas indicate brindling, which is broken up by the merle gene. The adult dog, Gus, is an older sibling, and probably a "full" (all-over) brindle tweed (genetically sable with brindle), judging by the wide range of different shades in his coat. Both dogs are owned by David Jenkins and their pictures were submitted by Holly Moody.

The merle gene is very unstable and liable to mutation, which means that sometimes it can shorten during development (note that it can only shorten, and never lengthen). When this happens, the dog becomes a mosaic, which means it has some cells with a different genopype to the rest. When tested, the dog may have three or even four M locus results (e.g. M/Mc/Ma).

In general, only two of these alleles are able to be passed down, and the mutated gene will only pass down if it's located in reproductive cells. However, it's not possible to know which of the three or four alleles a dog will give to its offspring until it has been bred, so it should be assumed that any can be passed down.

Mosaic merles often have visible effects, including large areas of solid colour (where the shortened Mc or Ma is present). A dog with just a small amount of visible merling sometimes used to be called a "cryptic merle", but we now know this is incorrect and they are likely mosaics.

There is a wide range of phenotypes associated with all of the above merle alleles and their combinations, and this can make knowing which merles are safe (or desirable) to breed tricky. All I have provided here is a very basic outline, and before breeding any merles I advise reading Mary Langevin's full study, which contains far more examples and detailed information than I am able to provide here.

Most genetics labs are only able to test for the basic SINE insertion and won't be able to tell you which merle allele your dog carries, so be sure to choose a lab that can give you all of the information you need. Also be aware that labs may vary in how they classify the merle alleles (drawing the lines at different numbers), so it's advisable to get the insertion number and compare to the chart above for an accurate result.

If you have a merle dog that has been tested and has one or more of the newly defined merle alleles, please submit their photos to jchappellart@hotmail.com so I can use their examples on this page.