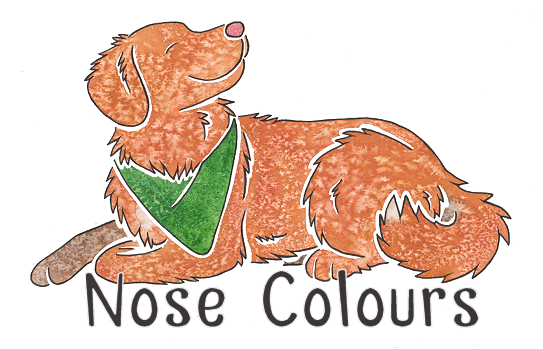 The default nose colour for dogs is black:

However, a number of genes can affect nose colour.

Liver (bb) dogs and dilute liver (isabella, dd) have noses ranging from deep brown to pink. Liver pigment does not seem to be retained in the nose as easily as black pigment, so many high-white liver dogs have completely pink noses. It is genetically impossible for a liver dog to have a black or blue nose.

As you can see, it can be impossible to tell a liver-pigmented dog from an liver dilute just by the nose, as the colour ranges are almost identical. However, you may notice a purplish tinge to the nose of an isabella which is not usually present on a liver.

Blue (dd) dogs have noses ranging from light grey to almost black. It is genetically impossible for a blue dog to have a brown nose. Note, however, that sometimes grey dogs can occur that don't have the blue dilution gene. So an apparently "blue" dog may have a black nose and dark eyes, because in fact it is a black dog with the greying gene rather than a proper blue dilute. Sometimes blues can also be very dark, so that their coat and nose appear almost black. It can be very difficult to tell whether such dogs are blacks or blues.

A "butterfly" nose is when a dog has patches of bright pink on its nose leather. These patches are randomly located and can cover any amount of the nose, from just a tiny pink spot to almost the whole nose. Butterfly noses sometimes occur on dogs with the extreme white spotting pattern (e.g. white Boxers, Bull Terriers and Dogo Argentinos), but generally they're associated with merles. Not all merles have butterfly noses though - double merles and normal merles with less dark patches than normal are more prone to them, and they are very common in harlequin Great Danes.
Butterfly noses are created when parts of the nose have no pigment (the colour pink is associated with a lack of pigment). The merle gene dilutes random parts of the pigment on the coat and nose, creating grey areas on the coat and pink areas on the nose. Harlequin Great Danes have an extra gene which dilutes the grey areas on the merle to white, so this extra strong dilution means harlequins are highly likely to have a butterfly nose.
The non-pink parts of the nose can be liver, blue or isabella if the dog is bb (liver) and/or dd (dilute). Livers and isabellas often have very light noses anyway, sometimes bright pink, so a butterfly nose may not show up on a liver or isabella merle (the whole nose may just appear pink). The first example below shows a liver merle with a visible butterfly nose.

Sometimes, in specific breeds such as the Bull Terrier, the term "dudley nose" is used to describe a dog with a pink nose due to high white on the face (see butterfly nose above). However, usually it's used to describe a dog with pigment loss on its nose.
Generally the pigment loss on a dudley nose is in the middle of the nose, spreading outwards to cover almost all of the nose on some dogs. The pigment loss causes the nose to become lighter in these areas, usually ending up as a dull pink. Dudley noses never lose their pigment completely and are never as bright pink as butterfly noses or even the pink noses found on liver dogs. There is also always a darker area remaining around the edge of the nose.
The lighter pigment on liver, isabella and blue dogs means that areas with pigment loss are very hard to see. Dudley noses are, however, very common on black-nosed dogs, and are particularly associated with the recessive red gene.

Also known as a "winter nose", this is a stripe down the centre of the nose that is often seen in Northern breeds and is strongly associated with the domino (Ed) gene. Both carriers and true dominos often show this nose pattern, and it can sometimes be more obvious in winter months.

Injury to the nose can sometimes result in pigment loss, either permanent or temporary.

This dog has injured its nose, probably quite recently. You can see stripes of pink and red where the pigment has been damaged.