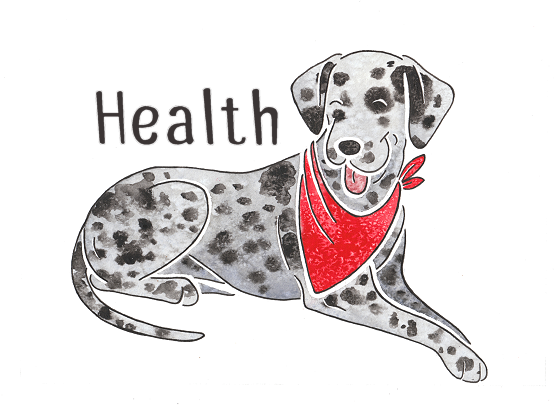 Unlike in many species, there are very few colour-associated health problems in dogs, and most are avoidable through careful breeding.

A homozygous (or "double") merle is one with two copies of the merle gene, and if the merle is a longer length (see Advanced Merle page), then this severely impairs the dog's ability to make pigment, leaving large areas of the dog pigmentless (white). Pigment is actually necessary for certain parts of the body to function correctly, so lack of pigment can cause issues.
Dogs with large amounts of white caused by the homozygous piebald allele (sp), such as Bull Terriers, Boxers and Dalmatians, can also have some of the same health problems as double merles, particularly deafness (which is a big problem in Dalmatians).

Deafness is caused by lack of pigment in particular parts of the inner ear, and can be unilateral (just one ear) or bilateral (both ears). It is commonly claimed that dogs with white ears are always deaf, but in fact it's been shown that whether or not pigment is visible on the outer ear does not affect whether or not the dog can hear. In other words, a dog may have coloured ears but still be deaf, and a dog with white ears will not necessarily have any problems, because the part of the ear that is affected by the lack of pigment is not externally visible. However, Dalmatians with ear or head patches do appear to have a lower rate of deafness than those with no patches at all.

The merle gene can also cause eye deformities when homozygous. This is because the location of the eye cells in an embryo happens to be the same place that pigment starts to appear. If there is a problem with the pigment, this can therefore affect the development of the eyes. Problems include irregularly-shaped pupils, subluxated pupils (not positioned in the right place), microphthalmia (abnormally small eyes, usually with impaired vision), and other, less visible abnormalities causing blindness and bad vision.

Lack of pigment anywhere on the dog can make the skin much more sensitive to the sun. This is a particular problem on the nose, as it is so exposed, but any area of pink skin is susceptible to sunburn and skin cancer. The same problem occurs with any animal that has little or no pigment. White cats are probably the most well-known example. Skin cancer rates in white cats are extremely high and a surprising proportion of cats with white ears end up having their eartips amputated to stop the spread of cancer. The main way to prevent sunburn in animals is the same as with humans - apply suncream!

There is a common misconception that dilutes are in some way naturally sickly - this is not in fact the case. As with most recessives, the dilute allele is in some way "faulty", but it is only faulty in its ability to distribute melanin evenly along the hair shaft (the uneven distribution causes the paler appearance).
This does not affect the health of the dog at all, simply its colour.

That said, the idea of dilutes as unhealthy most likely has its foundations in Colour Dilution Alopecia. This is an apparently genetic disease causing hair loss and skin problems. A dog with this disorder will typically appear "mangy" and have partial hair loss. It is usually reported from blue dogs, particularly Dobermanns, but presumably it affects isabella dogs too (diluted livers). Any colour can carry CDA but only blues and isabellas will have symptoms.

CDA does not occur on all dilutes and its frequency varies between breeds. It is particularly common in Dobermanns, occuring in up to 80% of dilute dogs. Dilutes in other species such as mice are caused by the same gene, and yet CDA is not known in these, implying it is not an unavoidable consequence of dilution.
CDA can theoretically be bred out of most lines by careful breeding of only blues with healthy coats. Breeding healthy blue x healthy blue is one way to reduce the occurence of CDA, and until testing becomes available this may be the only option as it is not possible to tell if a dilute carrier will produce CDA. 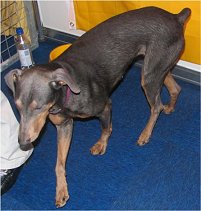 This blue German Pinscher appears to have mild alopecia. Its coat is dull rather than having a healthy shine, and it seems thin and patchy.

The same problem can also occur (albeit more rarely) on black or liver dogs, and is known as Black Hair Follicular Dysplasia. It affects black/liver hairs only, leaving all other hairs as normal. Because this condition is so rare, it often goes undiagnosed. I used to know a Jack Russell Terrier mix who was white except for a black patch on his back, which was hairless. His condition puzzled a whole string of vets and skin specialists, who suggested various types of mange and allergies, and he was never properly diagnosed as having Black Hair Follicular Dysplasia. Unfortunately for dogs with genetic hair loss conditions, there is no cure, although these conditions do not generally cause the dog to be itchy or uncomfortable and so are mostly harmless.

The modifier that causes ticking to become Dalmatian spots is thought to also be responsible for the kidney issues that affect a large proportion of Dalmatians. This gene (SLC2A9) causes an abnormality in the urinary system, where affected dogs excrete uric acid instead of the substance most mammals excrete - allantoin. The high concentration of uric acid leads to the formation of kidney stones, and it is estimated that up to a third of Dalmatians die from kidney failure or infections. Interestingly, humans are one of the only other examples of mammals that excrete uric acid, and this is also the cause of many of our own kidney stones and infections.

Grey Collie Syndrome, also known as Cyclic Neutropenia, is an autoimmune disease causing an extreme drop in white blood cell levels, leading to an increased risk of infection. Affected dogs are a pale grey colour, but are not genetically dilutes. These dogs are generally smaller and weaker than littermates, and rarely live long. Cyclic Neutropenia is a recessive gene and carriers (one copy of the allele) are not affected. Only Collies are known to carry the allele, and it is most common in Rough and Smooth Collies, appearing only rarely in the other Collie breeds. Thankfully, genetic testing is available for the Cyclic Neutropenia allele.

Note that there can sometimes be confusion between Grey Collie Syndrome and atypical merles, which can also be an unusual greyish colour. Atypical merles are not associated with any health problems and have normal development, so the difference should be clear even in very young puppies.