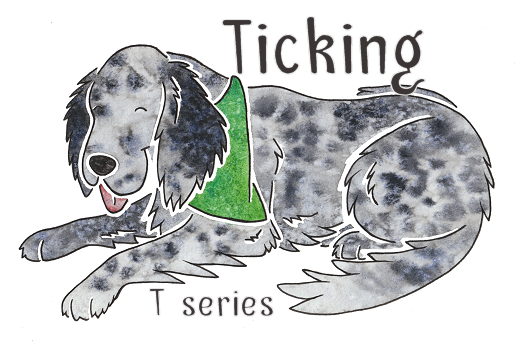 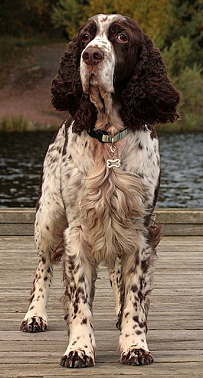 Ticking is flecks or spots of colour on white areas. It can occur on any white area on a dog, so long as the white is "real" white ( i.e. so long as it's caused by the white spotting series and not by a phaeomelanin intensity gene such as the I locus or urajiro). If a dog has the ticking allele but doesn't have any white areas, there will be no visible effect.

The specific gene that codes for ticking has not been fully identified yet, but it's thought to be dominant. It has been assigned its own locus - T - and there are traditionally thought be two alleles on that locus. According to the common theory, T is the dominant ticking allele, and t is the recessive clear white allele.

However, this theory does not account for the full variation in ticking and roan in dogs. It is probable that there are at least three T-locus alleles. Recent genetic research has proven ticking and roan to be distinct (but mapped to a similar area), so my own guess is that the T-series is most likely as follows:

It is not clear how these genes interact or what their order of dominance is, although ticking and roan appear to be dominant to their absence.

Generally, ticking is heaviest on the legs and the muzzle. If a dog has only a small amount of ticking, it will appear in these areas before appearing anywhere else. Roan, on the other hand, is more even over the whole body.

The colour of ticking/roan corresponds to the colour that the area would have been if there wasn't any white there. For example, a black-and-tan dog with white markings and ticking would have black ticking on its body and tan ticking on its legs, chest and muzzle, where it would be tan if it didn't have white. The English Setter below shows this well. 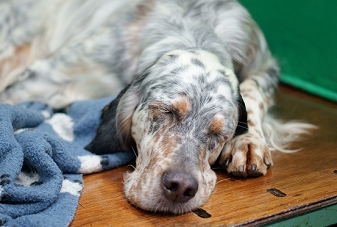 Roan is a pattern that produces heavily mottled white areas. Often only a small amount of scattered white is visible. 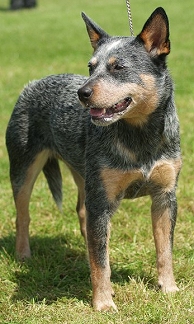 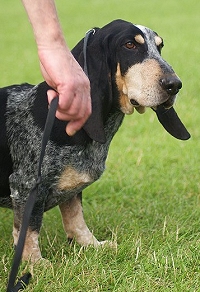 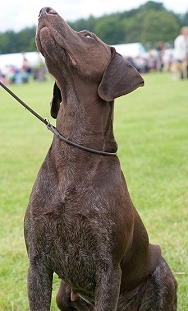 The three dogs above are extreme examples of roan. The Australian Cattle Dog and Basset Bleu de Gascogne are genetically black-and-tan, so the roaning is black on the body and tan on the points. With the Cattle Dog, the whole dog would be white if it didn't have roaning (note there are no black patches), as it is an extreme white piebald. The overall effect on the black areas of these dogs is similar to the "salt-and-pepper" colour found on Schnauzers, except if you got a close-up look at the hairs, you'd be able to see that they're not banded like the hairs on Schnauzers are. The Basset Bleu perhaps gives a better indication that roan actually consists of lots of spots, packed very densely to cover most of the white. This has led some people to believe that roan is, in fact, just very heavy ticking. However, others believe that it is controlled by a separate gene, and recent studies appear to have confirmed this.
The German Shorthaired Pointer shows liver roan. The roan here is even more dense and difficult to distinguish from the solid liver patches on the back and head. 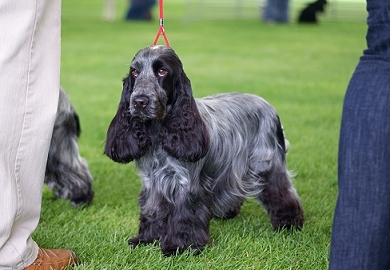 Black dogs with roaning often appear a greyish colour, and are commonly called "blue roans". The Cocker Spaniel above is a blue roan. Just like with "blue merles", these dogs are called "blue" but aren't actually genetically blue. The term "blue" is usually used to refer to black dogs with the dilute gene (dd), which dilutes the coat and nose to grey and the eyes to amber, but neither blue roans nor blue merles have this gene. A "blue" roan has no actual dilution in its coat, and the blue effect is simply caused by the mix of black and white hairs, which from a distance makes the dog look blue/grey. 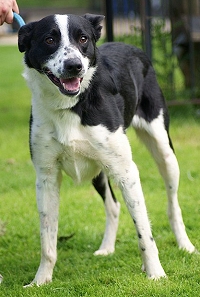 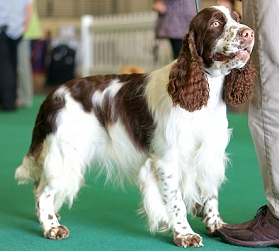 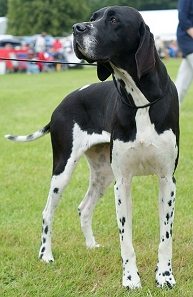 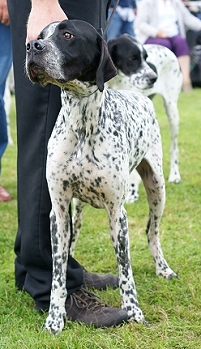 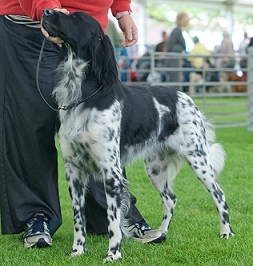 These gundogs show heavier ticking and are mostly likely TT. Note that their spots are much more distinct and rounded than the roans above. 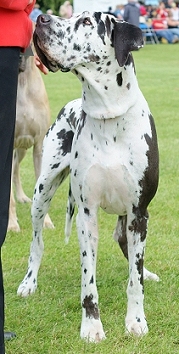 This Great Dane looks like it has ticking, but in fact the black spots are caused by the harlequin gene. It is genetically a merle, with its grey areas diluted to white. If you look carefully you can just about see a spot of actual white on its chest. This actual white is clear of ticking.

Dogs with ticking or roan are generally born white. The ticking/roaning develops as the dog grows. This can be rather dramatic, as in the Australian Cattle Dog. There is a popular myth that Australian Cattle Dogs are born white because of their Dalmatian ancestry. In fact, they are born white simply because they have the extreme white spotting pattern with roaned white areas. The roaning takes a while to develop, but the extreme white spotting is there from birth, hence the puppies are completely or almost completely white. 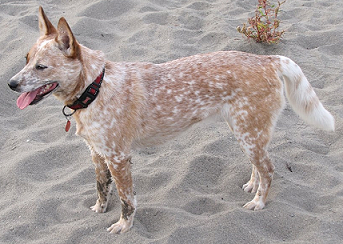 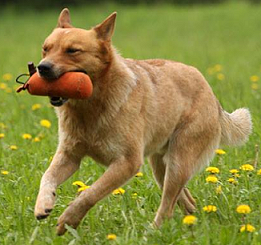 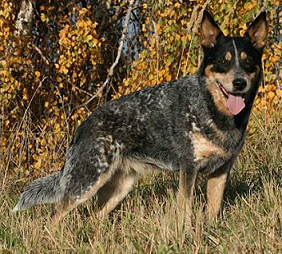 Three examples of roaned Australian Cattle Dogs. Solid (non-roaned) white areas on the tail are fairly common, as seen on the first dog here. The second dog is so heavily roaned that it appears almost solid red. You may hear roan Australian Cattle Dogs referred to as "speckled" or "mottled" - these terms just refer to different extents of roan and ticking. Some dogs, like the first one shown here, look like they have white spots on a coloured base, but in reality it's the other way round. 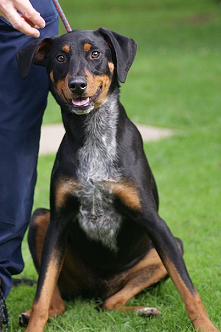 Roan and ticking can occur on white areas of any size. This beautiful Dobermann mix has a roaned chest patch. 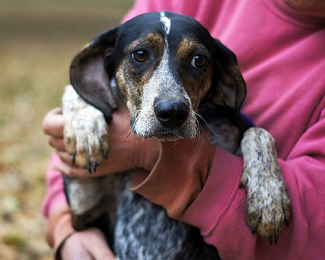 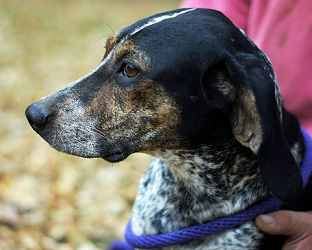 Photos submitted by Jamie Elvert
Here's an unusual and striking dog - a brindle-pointed tricolour (sometimes called a "trindle") with heavy ticking/roaning. The brindle points have a mixture of black and red hairs in the ticking. 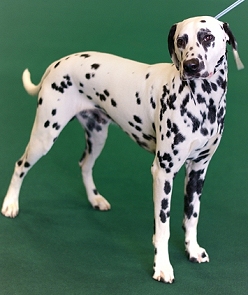 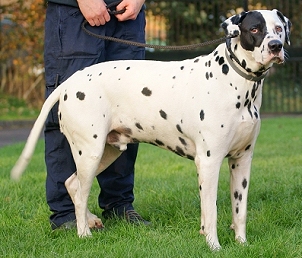 Dalmatian spots puzzled geneticists for a long time. They are unique to the breed and do not occur anywhere else in the dog world. Contrary to looks, Dalmatian spots and the harlequin pattern in Great Danes are not the same genetically.

It's now known that Dalmatian spots are in fact a form of ticking, affected by another gene that acts as a modifier. There appears to be a link between Dalmatian spots and kidney function, with Dalmatians being particularly prone to kidney stones, although outcrossing to other breeds such as pointers seems to resolve this.
Dalmatian spots are bigger than standard ticking spots, more sparse, and more evenly distributed (they do not get more dense on the legs and muzzle). As with all ticking, Dalmatian spots are whatever colour the dog would have been if it didn't have white. Dalmatians usually come with either black or liver spots, however red, brindle and blue are not unknown.

Dalmatians are born white and develop their spots later on, in the same way as other dogs with ticking or roan. They also occasionally have solid patches on their head and/or body, as with the dog on the right above. This is because they are genetically extreme white piebalds (spsp on the S locus). High white piebald is sometimes associated with deafness (when there is a lack of pigment in the inner ear), and sadly this is fairly common in Dalmatians, particularly those without solid ear/face patches.

Sometimes Dalmatians are born that display some ticking or roaning (effectively "muddying" the base white). This is probably caused by a slight mutation or error in the allele, stopping it from being expressed normally.

Some gundogs, such as English Pointers and English Setters, have round and distinct ticking that looks very similar to Dalmatian spots. These two patterns are thought to be genetically different, however it's not difficult to see how the spots on a Setter could have been refined over many years to become Dalmatian spots. 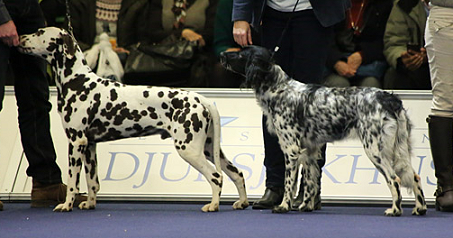 Photo by Jessica Pilhede
This photo shows a Dalmatian next to a Munsterlander (heavy ticking). As you can see, the patterns are extremely similar.

When is Ticking not Ticking?

The answer is: when it's on the base of a merle. The diluted areas on a merle are often described as being "ticked", however this is not the same as T locus ticking and is just a natural part of the merle pattern. 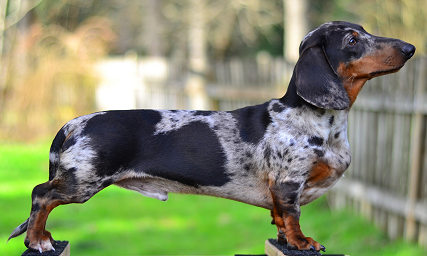 Photo submitted by Laura Stutts
This merle Dachshund (known as a dapple in the breed) shows very distinct "ticking" between its black patches. This gives an extremely similar appearance to some of the roans shown above. However, the solid tan points show that this dog does not in fact have any white markings (other than on the back toes!), and is a merle rather than a roan.

The amount of "ticking" on the background of a merle dog varies, but is most obvious on short-haired dogs like the Dachshund shown. 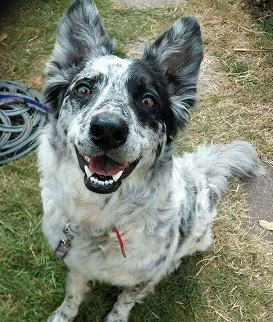 Sometimes merle dogs can have true ticking, however. Mist, submitted by Leanne, is a merle piebald with heavy ticking in her white areas. Because the base of her merle is fairly light, it's tricky to see which areas are ticked and which are merled. 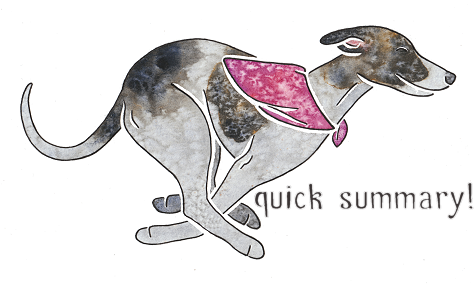 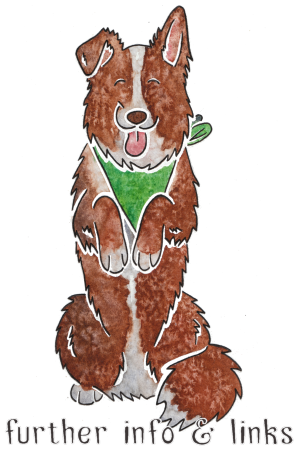